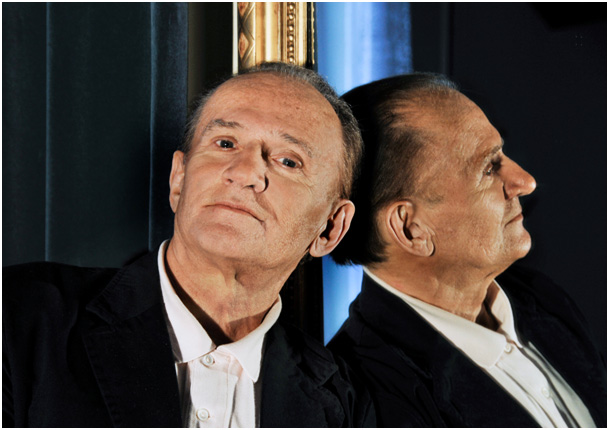 Per Ragnar is the actor who portrayed Håkan, Eli’s creepy and lost companion, in the film Let the Right One In. He has had a long career in television and film stretching back to his graduation from The Royal Dramatic Theatre School in 1965. In 1966 he became an assistant to Ingmar Bergman, and he had both his first film and television roles in 1968. He is also renowned for his one man show, Hitlers bordssamtal (Hitler’s table talks). In the interim, he has found the time to write almost two dozen books.

Per’s latest cinematic work was in the new Swedish horror film, Psalm 21. He was kind enough to agree to answer some of my questions when I contacted him through his agent, Birgitta Nielsen.

How did this part come to you?

Tomas Alfredsson called me. We had previously worked together on a movie for television called, “A little film about death”, where I played a twisted TV producer – together with the Ingmar Bergeman actor Erland Josephson.

Had you read the novel before filming? Have you read it since?

No, either before or after. I know from experience that the book and the screenplay are never the same. It is “dangerous” to commit to a book character as the movie script is different. I had heard that in the book my character is a teacher, an alcoholic and a pedophile. Thus, a completely different person than I portray in the movie …

If so, were there any scenes with Håkan from the novel that you wish you could have shot?

What was the shooting schedule like for you? Did you have to go up to Luleå?

Ten days of shooting at night in Luleå with 35 degress, terriblly cold and tough.

In the novel Håkan’s motivations are made all too clear, but in the film Håkan is more of an enigma. What motivates your Håkan’s devotion to Eli?

I see Håkan, if I disregard the vampire theme, as an extremely lonely little man who is crying out for love and acknowledgement. By him “working” for the girl, providing her with the nutrition she requires, he may be part of a small sense of community and gets a little sense of family. When he can’t cope anymore, he gives his life for her … Christ more than the Devil, that is.

What was it like working for Tomas? Did he know exactly what he wanted his Håkan to be, or did he expect you to fill out the character?

Since he chose me, he knew what he could get out of me. He is an extraordinarily prepared director, knows exactly what he wants. He had also seen me in one of my major roles, over many years, portraying Adolf Hitler in a one and half-hour monologue at the theater, Hitler’s table talks, an authentic material.

What was it like working with Lina? Have you worked much with young actors?

Lina was a nice and easy absurdly funny little girl. Yes, I have played in many Astrid Lindgren plays with children.

In many of your scenes, you are basically acting by yourself; in the woods, on the metro, and disposing of Jocke’s body. Is it more difficult to act without another actor to play off of?

No, not if you trust the director and he knows what he wants. And Tomas Alfredsson knew what he wanted!

In the scene where Eli touches Håkan’s cheek, it seems as though a bargain is being struck. Håkan will get blood if Eli will stay away from Oskar. What interpretation were you portraying in that scene?

He “knows” that it’s time for Eli to take over in the eternal succession, the vampire girls living course is forever, not her “donors”.

In the scene where Håkan is caught, he seems immediately resigned to his fate. I have seen many fans claim that Håkan wanted to get caught. Was it a part of what you were portraying in that scene that Håkan was relieved to be getting caught?

Exactly, he cannot go on with this eternal killing in the cold and darkness to enable her to live.

In the shot where Håkan dumps Jocke’s body into the water, it looks as though you could easily have gone tumbling into the icy water after him. Was that shot as dangerous as it looks onscreen?

Yes, it was unpleasant to do, it was cold and slippery on the tree branch.

Can you tell me about Håkan’s hat? It is rather… unique.

Yes. I bought it in Moscow when I was there with the Royal Dramatic Theatre School and studied their stage school and theater for three weeks. We were Ingmar Bergman’s students and all artistic doors opened for us. I bought it in the square outside the Kremlin. This was 1964!

You have been working continuously as a film and TV actor for, well, quite a while. How has the success of Let The Right One In impacted your career?

I have worked in film, theater and television for 50 years. I’m glad to be part of a world success. I did a test shooting for Milleniumfilmen, but Skarsgård (of course) got the part. (Stellan Skarsgård is to play Martin Vanger in David Fincher’s remake of The Girl with the Dragon Tattoo-Ed.) Then I got another request from another American casting company, it was some forthcoming film with Sean Penn …

In a few days we premiere with the film Psalm 21 where I play yet another evil man. Preliminary reviews are talking about the best Swedish horror film ever made …

Thank you very much Per, for answering my questions and for providing fans of Let the Right One In with an insight into your character.

You may discuss this interview with other fans in here.