More reflections on LMI and LTROI

For discussion of Matt Reeve's Film Let Me In

More reflections on LMI and LTROI

Last week, I came across a thematic analysis of LMI and LTROI on WTI's Facebook page. It helped lead me to re-watch Let Me In for the first time in a few years on Sunday. Since, then I've commented elsewhere about how it illustrates losing innocence, sharing some criticism of the film, and why I still think Owen would turn. One element that stood out to me from the analysis was the contrasting religious dynamics between the two movies. Religious overtones are observable throughout LMI while absent in LTROI. In the book, Staffan's religious devotion repulses Tommy. Reeves commented that the irreligious nature of Blackeberg had "left people completely unprepared for what was going to happen there."
.

I didn't go to church growing up. Looking back, I think it left me unprepared for dealing with evil in my early adolescence, which I also think is why LMI resonated with me so strongly back then. Ironically, Reeves partially inverts the theme, demonstrating how religion was used to externalize evil and internally overlook it. Owen's mother intoxicated herself on televised sermons while neglecting her son. The "notion that evil is somehow other, outside us," Reeves said, left Owen "very confused about what that says about him." He also described Abby was an "unleashed" version of Owen. When she kills the detective, he doesn't just back away in fear -- he steps in to help her.

An interesting touch I noticed was Owen's eyes lighting up the way Abby's did when he spied on his neighbors. LTROI's cinematography is more beautiful, showing off Sweden's natural landscape while retaining an appropriately cold atmosphere for the story. LMI features red and gold more prominently, respectively at certain indoor (Owen's apartment) and outdoor locations (the apartment complex and school). The latter aspect seems to stem from unfiltered light pollution. You can see it in a production shot of the film: 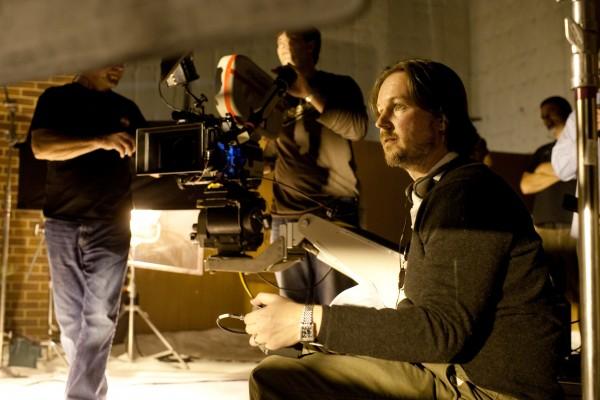 Ironically, when I first saw LMI, my room was dimly lit the same way. (Small yellow lamp, red curtains.) Whether or not intentional, I think the film's lighting suits the story's critique of suburbanism. It also has its own type of beauty, especially in the snowfall. The ambulance scene did an amazing job of showcasing New Mexico's landscape.

The soundtrack was best in LTROI -- it was subtle yet effectively conveyed the film's mood while maintaining an organic theme. I used to fall asleep to some of its songs. LMI's soundtrack tended to be overbearing sometimes. Its melodies weren't as consistent and some weren't memorable, but others were done really well. The tracks for the intro, the horror scenes, and especially the ending were really good.
...But if you meet a friendly horse, will you communicate by Morse?
Top

Re: More reflections on LMI and LTROI

I was brought up Catholic and maybe that's one of the reasons I resonated with LTROI. Religion likes to hijack love and anything good, as if God is only in some building with a cross on it. LTROI showed that love can be found even in the darkest of places. I think that's why the color palette is more stark in LTROI like the pure white snow against the pitch black sky and maybe Oskars white blonde hair vs Eli's black hair?? The warmer colors of LMI I think convey the muddying of the waters. LTROI is about love itself, using the story of Oskar and Eli to convey it almost symbolically. I think LMI is more about how complicated love is to the individual feeling it. Is it real or am I being used etc..

Return to “Let Me In”